Mops comes with a large number of predefined classes that provide you with a strong foundation upon which to build your programs. The more you know about these classes, their methods, and the functionality of the objects they create, the more comfortable you will be in designing your programs. Mops in many ways is like an Erector Set, it provide many pre-built pieces, but you provide the imagination to turn those pieces into a usable program.

Predefined classes serve an important function in Mops. They insulate you from the concerns of extensive coding required for all the commonly used Mac functionality: windows, dialogs, menus, graphics, disk file manipulation, and dozens more. The nature of the methods in the predefined classes will be largely understandable to you by the time you're finished with this tutorial.

What this all means is that while you send comparatively simple messages to objects created from those classes, you are automatically performing very sophisticated operations not all that different from those that an Assembly Language programmer would use. You are also left with fewer concerns about making your program Mac-like, since the predefined classes lead you in the right direction from the very start. To a large extent, the predefined classes act as the Macintosh development environment or framework that is provided with more traditional compiler languages. They are also part and parcel of the object orientation of Mops.

The Mops predefined classes can be divided into two general groups. One group, called Mops System classes, consists of classes that are not necessarily specific to the Carbon framework. The System classes control things like file manipulation, basic data structures (integers, variables, arrays), and other computer housekeeping tasks. These classes of course have been designed to work specifically with the Mac, but they work largely behind the scenes, since they don't directly affect the way you and the computer communicate with each other.

The second group, called Toolbox classes, are those that make the connection between the programmer/user and the graphic elements of the Mac operating system. "Graphic elements" is a broad category that includes such things as menus, windows, text input, mouse manipulation, and program control via the mouse or keyboard. The Toolbox classes are the highly visible, "show biz" classes of Mops.

Most of the predefined classes in both categories are subclasses of a kind of master superclass, called class Object (which you were introduced to in previous lessons). While class Object, itself, is a subclass of yet another superclass, class Meta, you won't have to concern yourself with that particular relationship. Just think of class Object as the ultimate superclass of all classes, and you won't go wrong. Class Object is predefined in Mops, in the Mops source file 'qpClass'. It has very primitive functionality, and no instance variables.

Among the most used predefined classes are several that are grouped into a cluster called data structures. The diagram below shows the organization of the Mops data structure classes, which are listed in the files called 'pStruct' (in 'PPC source'), its companion source file 'zStruct' (in 'Mops ƒ'), and 'Struct1' (in 'Extras').

These classes form the basis of much number and string (text character) storage and manipulation inside a Mops program. In the rectangle example in Lesson 6, you already saw how instance variables of one basic data structure class, Int, were used as components of coordinate Point objects, which were, in turn, used as components for a rectangle object.

The classes to the left of the vertical line in this digram are called scalar classes because they reserve a fixed amount of memory space for each instance of their class (just like a ruler marks a fixed area according to its "scale"). An integer object (Int), for example, always has two bytes reserved for data (whether or not the bytes contain any meaningful data when an integer object is created).

To the right of the vertical line in this diagram are a group of indexed classes. You can tell from the names of most of them that these classes provide the rules for setting up arrays in Mops programs. An indexed array is a convenience that helps your program reach into a list of data in memory and pick out desired pieces. If you consider that an array object might look something like this in memory: 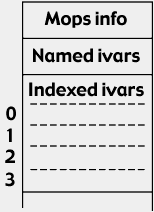 you'll notice that some data cells have reference numbers attached to them. Each number is an index�like an index tab in a three-ring binder�to that data cell. It is much easier and more efficient to reference an object's data by an index number than it is to provide the address in memory for the datum your program needs at a given moment.

The differences between the various indexed classes include the number of bytes each data cell is to contain (1, 2, or 4), as well as other considerations that we will discuss later.

The class (col) is an example of a class which doesn't have any objects of its own. It is just a convenient way of defining a group of classes where each class that inherits from (col) will automatically have a number of methods in common. Rather than repeat the definitions of these methods in each class definition, we "split them off'" into a single superclass in which they can be defined just once. We call this kind of superclass a generic superclass The class Longword is another example of a generic superclass. It is useful for defining methods common to the classes Var and Handle, but it doesn't have any objects of its own.

Another group of classes that gets a workout is the one that links you to QuickDraw, a powerful graphics library (included with the Carbon framework). The following diagram shows the QuickDraw classes and the superclasses from which they were derived:

Other graphics-oriented classes (not shown in this diagram) include those that help you create windows, menu bars, and menus, plus a set of classes called controls ("zCtl" in 'Toolbox classes') that handle reactions to clicking the mouse on buttons and scroll bars.

In addition, there are numerous predefined classes and objects that give you shortcuts to opening and closing files, sending output to the printer, producing sound, and other functions. The Classes section of this manual contains in-depth explanations of all frequently used Mops classes. You will look to these reference sections very often once you have completed this tutorial.