Objects and Their Messages

That's all there is to it! By creating this object, you have added a new Mops word, "Box1" to the dictionary in memory. Recalling our definition of Rect from the previous lesson, you can visualize the object in memory to look like:

Zeros are placed in the instance variable cells when the object is created, and they are holding space for numbers whenever the object receives a message to put data there.

When you type a Mops message in a program, it has three parts to it: the parameters, selector, and receiver.

The second part, the selector, is actually the name of the method containing the operation you want the object to perform. In other words, the object "selects" which method of its class is to be put to work; the object matches the message's selector with the method in the object's class (or up the superclass hierarchy if there is no match in the immediate class).

Since Box1 is an object of our rectangle class, you can send a message to it that selects one of the methods defined in class Rect. If you send the message

you put the coordinates 300,20 and 400,100 into the data cells reserved for TopLeft and BotRight in the Box1 object. After all, that's what the PUT: method in Box1's class does: it places two sets of two parameters into an object's data cells.

If, at some future time, you create a new object of class Rect, called "Box5", Box5's data cells would be empty at first. A separate PUT: message would have to be sent to Box5 to place Box5's coordinates in that object's data cells. This is how objects maintain private data.

Now, to draw the objects on the screen with Box1, you need to send another message, one that calls upon the DRAW: method of class Rect. The message would be:

If you were defining class Rect from scratch, you could also define a new method that combines the functions of two methods into one. Then, a single message would take care of both the PUT: and DRAW: methods. For this to happen, you need a way for the new method to look up the methods in the same class. That's where a message receiver called SELF comes in handy. With the new method (DISP:) the class looks like this:

The DISP: method contains the messages, 'put: self' and 'draw: self'. The 'put: self' message is saying, Do to the current object everything that the PUT: method in this class does. The same goes for 'draw: self'. If you had intended one of these messages to look up a method in Rect's superclass, the receiver would have been SUPER (as in 'put: super').

Something important happens when you have the 'put: self message inside the DISP: method. The DISP: method now expects to find four integers passed along with any message bearing its selector, just like the actual PUT: method that executes the storage command requires four integers. Therefore, to both locate and draw Box1 on the screen, you would send the message:

If you want to try this, you'll have to have a window to display Box1 in, as you did in the [../Overview/Chapter1.html Introduction]. So first copy the Rect definition (above) to the Mops window (either by typing it in or by copying and pasting it). Then select the whole of the definition (by dragging with the mouse). Then hit the ENTER key. This will cause all the selected text to be executed. In this case, since the code is a class definition, the result of executing the code will simply be to define the class Rect. Nothing will seem to happen, but the definition for Rect will have been entered into Mops' dictionary and will be ready to do your bidding.

Now type and execute this:

and your Rect instance (Box1) should appear in the window ww.

Before taking one more step, let's summarize. Creating a Mops program entails the following steps: defining classes; creating objects that are instances of those classes; and then sending messages to those objects. Building a hierarchy of classes starts with the broadest class and works toward the more specific classes, with subclasses inheriting the characteristics of their superclasses.

The following diagram will help you visualize the structure of the program example detailed in this chapter. It graphically portrays the relationships between the classes and objects discussed above. 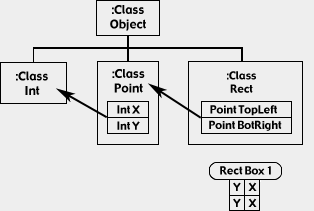 Given this framework, when you issue the message '12 10 100 50 disp: Box1', the parameters fill Box1's data cells held in reserve when Box1 was created.